It’s been 7 years since FaMESHed first opened, the first all-mesh shopping event I ever visited. Back then I remember it being hard to find good quality mesh to wear, to use for home and decoration so FaMESHed was a dream come true. I’m happy to celebrate this milestone with them.

As with every round, there are many merchants bringing you brand new releases (join the in-world FaMESHed Update Group for a demo pack to sample a variety of products at home before you head to the event) but this round also includes many gifts! I’m yet to go out and buy everything I want but I did sneak into the cam-sim (Update Group members only) this morning to grab every little present out there and that’s mainly what I’m blogging today!

Honestly, the items below are about 2% of the gifts actually available. Ranging from dresses to shoes, necklaces, earrings, gorgeous decor, shirts, several items for men, and so much more. I’m a bit of a ‘freebie’ snob, I’ve found it’s rarely something I end up liking or using, but these presents out at FaMESHed are honestly great. The merchants really outdid themselves so don’t waste too much time making your way to the event. Do keep in mind though that these gifts are only available to members of the Update Group linked above.

It’s been a while and this may not be a regular thing since money doesn’t grow on trees but… I’ve missed taking photos, I’ve missed blogging and hell, I’ve missed shopping. Still ever the Blueberry junkie, I ran for Uber first thing this morning and continued putting this shot together for your enjoyment. Couldn’t resist the Mega Pack but, as always, colors can be purchased individually as well or you can get the specific pattern packs!

My buddy Bruce… well, he did some shopping of his own. Recently discovered a love for RKKN which is a new favorite store for the both of us. And with the Elevator set Amitie has released for Uber, we couldn’t resist the shot of a couple stepping out into the hotel lobby for their first vacation together.

Today I’m bringing you great news on a few new releases from your favorite stores around the grid. First off, DeeTaleZ is in this round of The Mix bringing you a brand new applier set for LOGO’s Alex mesh head. The applier’s called ‘Marie‘ and for this one, hairbases are included. Marie’s available in all the regular DeeTaleZ skin tones with a freckled or no freckled option. We’ve also got some new releases from the Addams mainstore this week. The long awaited ‘Sabrina‘ dress came out this week along with the ‘Malena‘ denim shorts. Sabrina comes in various mesh-body specific sizes including Slink’s new ‘Hourglass’ body and as always the Fatpack includes 4 exclusive patterns that can’t be bought as a single item. On top of that, whether you buy a fatpack or a single pack there’s 2 versions of the dress included; a long train or a short train. The Malena shorts come in various different denim patterns and a HUD allowing you to change the metals and colors of the belt. To top this all off we’ve also got a brand new hairstyle released by TRUTH. This style, ‘Morgana‘, is split into two actually; a left side and a right side. This allows for some incredible mixes of the hairdye HUDs that come with it and on top of that there’s an additional dyes set on every single HUD called ‘colors’ with brand new textures and blended tri-colors for when you wanna get really funky! And last we’ve got my tattoo from Dita Couture, another beauty out now at the Premium Only Event. This tattoo comes with a layer for classic avatars as well as HUDs for Maitreya, Belleza, Omega, Slink and TMP so if tattoos are your thing make sure you check out Dita Couture and stop by the Premium Only Event!

POSE: Bounce This Poses – On The Go

In light of Strawberry Singh’s Monday Meme “Second Life Made Me Learn Challenge”, here’s my contribution for today. I will warn you upfront, this is a more serious post than I’ve ever done before and possibly a little heavy so I won’t blame anyone for scrolling past my answer to her Meme and heading straight down to “the look”.

This month’s Uber is in full on Boho theme, one of my favorites. So colorful and rich, so cheerful and alive. The cockatoo on my shoulder was a gift from a friend. She’s very interactive and cheerful, she learns tricks and chats your ear off. Mine’s a flirt, hitting on anyone I’m hanging out with and she does ask to be fed but thankfully, feeding her is a simple menu option and totally free of charge. No breeding, no food to buy, just a loving and fun pet. I adore her! Oh and my Slink hands are the newly updated ones! I’m quite pleased, I love my updated multipack folder which has all hand types packed up in 1 single folder and size, the size which is now changeable via the brand new utility HUD. Great product update and if you haven’t gotten yours yet please do head on over to the Slink mainstore and hit the redelivery terminal.

“A thousand miles between us now
It causes me to wonder how
Our love tonight remains so strong
It makes our risk right all along”
Today’s post doesn’t ask for much explaining. Valentines is beautiful yet bitter sweet when your heart’s at the other side of the world. I imagine myself in a state of dreams and I fantasize, yearning and longing until I’m whole again. I love you.

INSPIRATION: Westlife – I Wanna Grow Old With You

I’ve always seen these but never participated before. Usually want to but a lack of time or downright insecurity tends to get the best of me. Today however, I couldn’t resist! Strawberry Singh‘s Monday Meme! A movie character meme and after reading that the wonderfully stunning Emma Watson is going to be portraying Belle in the new live-action Beauty and The Beast.. well the choice was easy. I’ve actually spent most of the day looking for the right dress and hair and eventually decided to use a Meli Imako kit and retexture the dress myself to make it look-a-like. For the hair I actually combined 2 different Truth Hair styles (some editing and hair breaking was required!) because the Belle hair I had just didn’t quite work. There’s no new items in this post but nonetheless, I’m quite proud and I hope you’ll enjoy! ♥ 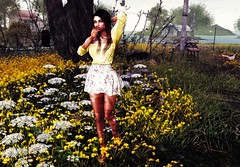 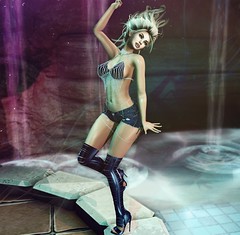 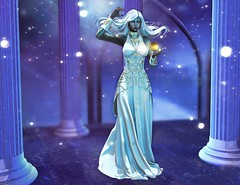 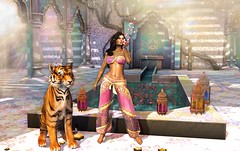